Posted by Shiananda at 5:29 PM No comments:

Please Add your name and a short personal comment to this petition asking for the resignation of the Canadian Minister of Fisheries Gail Shea who is acting in a completely reckless and abusive way towards the ocean habitat.  http://www.ipetitions.com/petition/canadian_seal_hunt/


For decades the Canadian Fisheries staff (and the respective minister) have claimed to properly set sealing quotas based on conservation principals. Expanding the quota yet again, in spite of catastrophic sea ice scarcity, shows the conservation lie for what it is. The seal hunt is supposed to start in a few days from time of this publishing (March 18), and the quota has increased to 330,000. The sealers can kill an additional 50,000 seals over last year’s quota. Gail Shea (of the Conservative party), the current Minister of Fisheries, continues to claim the quota is based on conservation principals; maybe she means conserving sealer votes for the federal election.
The government needs to earn their votes by following the wishes of the majority of Canadians (whom polling has consistently shown are against the hunt). There's no market for seal products this year, and with almost no useable sea ice, it's more expensive than ever to hunt seals; with little or no economic value from killing seals this year, the seal hunt is more of a waste in 2010 than any previous year.
The quota this year is outrageously reckless, and an abuse of responsibility; we demand the resignation of the (dis)Hon. Canadian Minister of Fisheries, Gail Shea
Posted by Shiananda at 12:40 PM No comments:

Why is Canada Still Killing Seals?

Most people would agree that there is something terribly wrong with shooting and smashing in the skulls of baby seals, yet despite international outrage, the Canadian government allows sealers to beat and skin hundreds of thousands of these gentle creatures every year. So why is Canada killing seals?

The seal slaughter exists because of the overall demand for fur. During Canada's annual war on seals, sealers routinely hook live seals in the eye, cheek, or mouth to avoid damaging the fur, then they drag the seals across the ice. Many of these gentle creatures may not even have eaten their first solid meal or taken their first swim before they are slaughtered for their skin.

In 2009, the European Union voted to end the sale of seal products, and the U.S. Senate unanimously passed U.S. Senate Resolution 84, calling for an immediate end to the annual seal slaughter. It's time for Canada to wake up! And with the help of caring people like you, we can put an end to the slaughter once and for all.

Posted by Shiananda at 3:26 PM No comments:

Canada Still Fighting Seal Ban! Do they EVER give up? 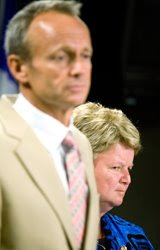 Thank God the EU ban on Seal Products went through.
Here is the pathetic and wining "sermon" from our Canadian Officials on the results:
Canada to launch protest against Seal product ban
In short:

Canada will launch a formal protest with the World Trade Organization over a ban on the import of seal products approved by the European Union, International Trade Minister Stockwell Day announced Monday.

The ban, which was approved Monday at a meeting of EU foreign ministers in Brussels, would be implemented in all 27 EU member countries over the next nine months, in time for Canada's next seal hunt.

Why Canada persists in supporting sealing is a mystery. Officially, the EU's ban on seal products and the launch of the free trade talks with Canada aren't linked. But Canada needs the trade deal more than the Europeans. Canada would gain free trade and investment access to 500 million EU citizens, against the EU's access to 33 million Canadians.

Canadians like to think of themselves as the peacekeepers of the world, beloved for their civilized ways. The Maple has been the decal of choice for travelling backpackers for decades. But mention Canada to your average European and, increasingly, you get looks of disapproval. The ugly truth is that many Europeans associate Canada with dead seals in the same way Norway and Japan instantly conjure up images of dead whales. Blood in the water, blood on the ice-for most of the world, it's the same thing. In case anyone needed a graphic reminder, this past May, Governor-General Michaëlle Jean gobbled down a raw seal heart for all to see at an Inuit feast.

Canada also keeps promoting the bloody image through its endless defence of the Atlantic harp seal hunt, even though the slaughter makes no political, moral or economic sense. This past spring, when the European Union voted to ban the import of almost all seal products, Canadian politicians and diplomats had yet another pro-sealing spasm. Even before the vote, and as Canada and the EU were launching free trade negotiations, International Trade Minister Stockwell Day vowed to appeal to the World Trade (WTO).

For The Rest of the Article Go Here:

Posted by Shiananda at 9:23 PM No comments:

Sarah Palin: Meet the Competition:
The Canadian Governor General doesn't just hunt animals in her spare time, and drape the spoils over the sofa in her office. No, Michaelle Jean guts harp seals with her bare hands and devours their hearts as part of a ceremony of political solidarity with seal hunters:
Seal Ceremony Makes Jean an Arctic Star:

Portrait-of-madame-michaelle-jean-as-a-death-culture-agent
Connect the dots: voodoo, Morgentaler, unjust Afghan war, raw seal heart, etc. Her latest stunt is to pretend that she is interested in the supposedly traditional cultural practices of the primitive Inuit people in Nunavut, one of Canada’s most recently colonized aboriginal groups.She did this by gutting a freshly slaughtered seal, extracting the animal’s bloody heart, and eating a portion of it for the delectation of the globe’s incredulous media outlets. Video clips of this nauseating and embarrassing spectacle are also available here at the CCC BLOG.

I guess her love for Canada does not include wildlife: After swearing the oath of allegiance, Jean rose in the crowded senate Chamber to address her audience and the nation and could barely contain the emotions stirred by the momentous day's events."I am determined that the position I occupy as of today will be more than ever a place where citizens' words will be heard, where the values of respect, tolerance, and sharing that are so essential to me and to all Canadians, will prevail," the Haitian-born Montrealer said, visibly struggling to contain her tears. "Those values, which are paramount for me, are linked inextricably with the Canada I love."

She's Our Very Own Braveheart! I've never seen an unflattering photo of Michaëlle Jean. She's gorgeous even with seal blood dripping from her lips.

Posted by Shiananda at 7:55 PM No comments:

Shiananda
Peace and Love For All Animals. Let us create earth the way the divine plan was intended. All life once lived in Eden, humans have created Hell. We can exchange hell for heaven with each simple action we take, each inspiration we evoke, each pleasure we ensure is not at the expense of another.